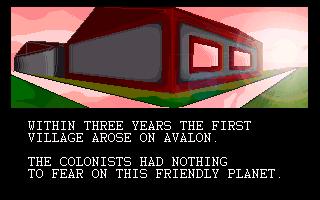 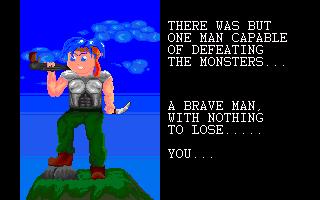 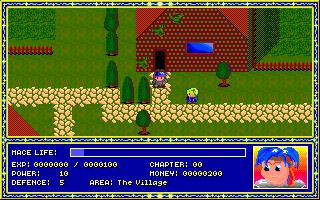 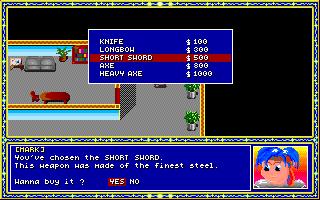 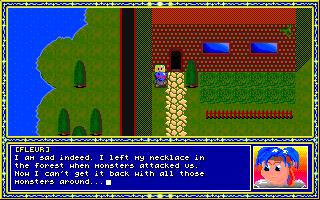 Juli 2145 AC. The earth as we know it was almost destroyed by it’s own inhabitants. The air was heavily polluted, the ozon-layer gone. All vegetation had died out. Almost a century ago, the effects of their lifestyle had already become clear to them, but as humans are, they continued living in their bad way without thinking about the consequences for their children, and slowly the air became more and more unbreathable. The second thing that happened at about 2105 AC was the terrible war that started almost instantly with the destruction of the last nuclear warhead by the Chinese. For more than a century, peace had been in large parts of the world. But suddenly, appearently without any cause, every country in the world attacked it’s neighbours for some insignificant reason. It was even said that God Himself had left the world. A group of people, known as the Avalon-cult, believed that the world would come to an end. Of course that kind of groups were found all the time, but this group had some interesting ideas. It’s goal was to escape from the dying earth before it was too late. To accomplish this it was necessary to steal a spaceship from UNINSTALL *, (United Nations International Nuclear Space Technology Association at a Lethal Level) which wasn’t easy, but they managed to do it. Their plan was to use the newly invented technology that made it possible to freeze people for many centuries in order to flee to a distant planet called Avalon, which they believed had an earth-like climate. Their plan succeeded and on the fourth of July twenty-five people froze themselves onboard the UNINSTALL 4000-BX spacecraft, which was originally intended to fly to Pluto. The equipment on the ship was excellent for their purposes and because of the atomic engine they could fly over the great distance they had in mind. They turned on the engines and their journey to the unknown began.

After almost two-hundred years of physical death, the ice in their tubes began to melt, and they awakened. They were indeed in orbit of the planet Avalon, but their moment of victory was not to last very long, as they discovered that six of them did not awake from their artificial sleep.

An organisation which was found after the explosion of Apollo 666, a terrible accident that happened in 2065. This “accident” made it clear to the world that NASA was a sick and corrupt organisation and therefore the UN found their own space-organisation which they called UNINSTALL.

The first thing they did, was to scan the planet for alien life. Strangely enough they found nothing but vegetation. Large forests covered the planets surface, but according to their scanning-equipment there was no animal or intelligent life, which was of course very odd. But the colonists didn’t pay attention to such details. They did not double-check their scanners and just landed on a good spot on the planets surface. They began by building a small village. Not expecting any danger they didn’t fortify their settlement. Four years of happiness and prosperity made the colonists believe that they had found their way back to paradise. Their hazardous operation was a complete success.

The planet was just like earth. The air was breathable, blue and full of clouds. An Avalon day consisted of twenty-two hours and twenty-seven minutes. The average temperature on Avalon was twenty-six degrees Celsius. The colonists discovered that there were several plants which they could eat, and the chickens they had brought from earth were excellent for their eggs and meat. One of the colonists however, who was called Caddman - nobody knew his real name - just didn’t believe that they were alone on the planet. He was the only one who had fortified his house and he kept warning the others for what dangers they might encounter. The villagers thought that he was crazy and paranoid, and they ignored him. They thought that his mind had become damaged during their long travel through space. Caddman told them stories about strange and dangerous creatures in the woods, but they didn’t believe him. They trusted their equipment and saw no reason for extra caution. Unfortunately for them, their ignorance was almost fatal, because one sad day, the village was suddenly attacked by hundreds of strange creatures. They were totally surprised by such a huge number of foes. It was only because of the courage of Mace, a young man who had on earth been a warrior during the Great War, that they could resist the attack. Mace managed to kill some of the creatures that seemed to be in charge of the attack. Nevertheless, the spaceship was destroyed and there were several casualties. As quickly as they could they built a wall to protect the village against any new monster-attacks, but paralysed with fear and with no knowledge about that kind of military matters, they couldn’t effectively build good fortifications to defend themselves. When a new attack would come, they would most certainly be slaughtered. Caddman was not seen at that time and most of the remaining colonists believed that he had fled and left them to die. Mace however didn’t believe Caddman was mad. He thought Caddman was trying to seek a way to defeat the monsters.

Lee, who was the leader of the colonists, was not so convinced about that and he decided to end the threat himself. He tried to negotiate with the monsters but they captured him in his effort. Mace, who had earlier shown his courage and skill by saving the village from the first attack, now was the only one capable of successfully finding out what was going on. He volunteered to seek for Lee and to find out what the monsters wanted in order to secure the safety of human life on the planet. He had to succeed in his mission, or else the remaining villagers would die a violent and quick death, without knowing who or what it was that killed them and for what.